Because our faith in Christ isn't just anything…It's everything!

Jacob’s well stood at the crossroads outside of town in Sychar in Samaria as the scripture reading tells us.  Though it still head good, clean drinking water in reservoir, by the time Jesus was around it was more of shrine than a well.  According to the Old Testament tradition, Jacob in the ancient Israelite past bought this land, dug the well and left it to Joseph, his favorite son.  Joseph, when he died, was carried back from Egypt and buried there.

She had managed to make a mess of her life.  As far back as she could remember, there had always been a restless urge in her, an unsatisfied longing, and a thirst that could not be quenched.  She went through life as one possessed, looking for love in all the wrong places.  She had married the wrong men, eating and drinking and being merry.  She made promises and quickly had to break them.  She was used and because of her abuse she lost her self-esteem.  She lost herself.

So when she arrived at the well that hot mid-day afternoon, it never occurred to her that the man she saw there would reach out in her direction.  He was a man, a Jew, maybe even a rabbi.  She was a woman, a Samaritan, living in sin.  The wall of separation between them was high.  Women and men didn’t speak in public; especially a Samaritan woman and a man of the Jewish faith. 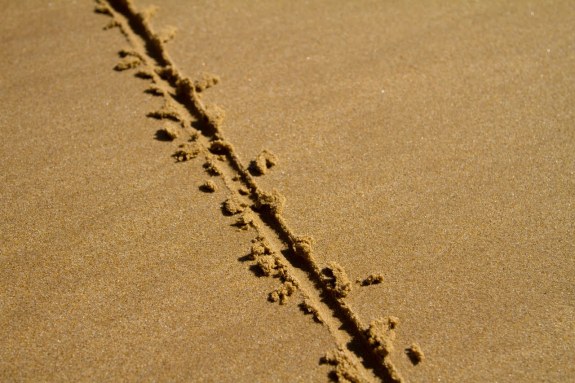 In Jesus’ presence she found herself and the reality of her own sin.

Jesus must have had a way with cutting through the small talk and getting to the heart of the issue.  He looked into her eye, and she could not put off the guilt.  And so in a moment of complete disclosure, this woman, who was considered untouchable by the divine and the Son of God stand face to face with no pretense about their identity.  Both stand fully lit at high noon for a bright moment in time, everything that separates this woman and Jesus fall forgotten to the ground.

When Jesus came, the woman of Sychar found in him peace for her troubled spirit, answers to her questions, and the living water of God’s forgiveness and grace for her soul.  Jesus spoke words of hope to her:  “Those who drink of the water I will give them will never be thirsty.  The water that I will give will become in them a spring of water gushing up to eternal life.”  But even more than these words was his presence—the calm strength of Jesus, the sound of authority in his voice, the assurance of his love.  She must have been assured that Jesus was God.  And somehow, she stood face-to-face with him.

I’m sure that the gospel writer, John intended this story to follow the story of Jesus and Nicodemus.  We heard that story last week.  After encountering Jesus in the middle of the night, Nicodemus (a leader of the Jews), falls silent when he learns who Jesus truly is, and then in the very next chapter of John’s gospel, we see an irreligious fallen woman at the water well when she takes an unexpected step:  she is the one who acknowledges Jesus as the messiah, not Nicodemus.  She is the one who remains in the light of the day and spreads the good news of Jesus.  She runs out after meeting him and tells others about the man she just met, bringing them to the good news of Christ, and as a result of her testimony, the Bible says that many came to believe in Jesus.

It’s as if John intended to place these two stories back to back for the reader to see the difference between the two.  You might recall that Nicodemus meets with Jesus in the dark for fear that others would discover he met with this itinerate preacher.  But, here is this fallen woman meeting with Jesus in the light of the day at noon.

And notice what Jesus does.  He deals with this woman’s thirst, and not her sin.  He reached out to her, not to cast shame and send her further away from God’s presence, but Jesus empowered her, he literally transformed her life.

Few of the people around Jesus have as much to tell about him and his effect upon them as the woman at the well in Samaria.

The truth is, we are all like the woman at the well, and we all thirst for the Living Water that God provides.  We thirst for a savior who will meet us where we are on our level, not in some far away distant space, but a God who is like us.  The beauty of the story of the Samaritan woman at the well is that God reaches out to all and welcomes everyone to taste the living water.  No matter who you are, what you’ve done or haven’t done, you are all invited.  So come, accept your invitation and come.  Receive a drink way down in the well of Living Water of God’s grace. For in Christ, we are forgiven, redeemed, and refreshed by this living water.